Markdown is great for focused, productive writing. But it might happen that it gets in the way of your specific writing task. In Ulysses, there is a simple solution to this problem: Just change the markup.

Let’s assume you’re an academic who writes a lot of references in [square brackets]. Ulysses is using these to mark up links. You can escape this by writing \[, but you’ll probably find it inconvenient to do it over and over again. The alternative: adjust the Link markup.

To customize your markup, go to Ulysses › Preferences and switch to the “Markup” tab. Click on the markup selection pop up button in the upper left corner and choose “New Markup…”. Select a name for your first personal markup and a template to use as basis. For now, you should stick with “Markdown XL”, Ulysses’ default markup language. 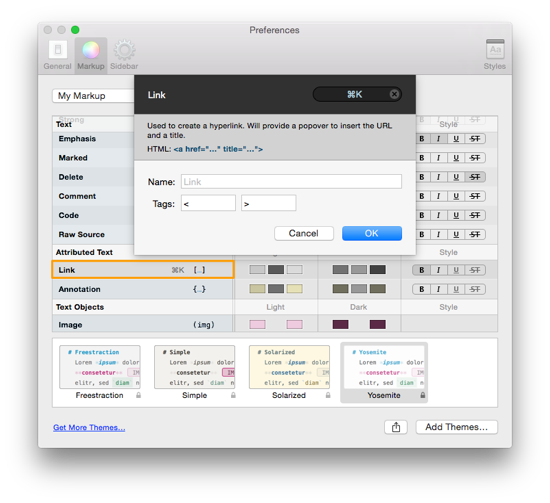 Once this is done, you’ll see an overview of all definitions in the markup. Scroll down to get to the Link markup, then double-click it to modify it. You can now, for instance, change the Link tag to use angular brackets < > instead of the square brackets. An alternative could be switch to double square brackets [[ ]] – just choose what suits you best. 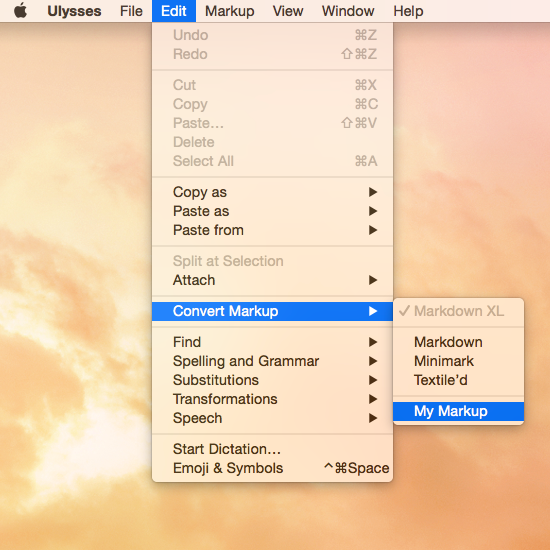 To use your new markup, switch back to the editor. Then, open the menu Edit › Convert Markup and select the markup you’ve just created. Voilá: Square brackets will no longer be considered as links – but angular links (or double squares) will be, from this point on. (Please keep in mind that you will have to switch the markup for every single sheet. Glued sheets will not update automatically.)

What’s more, all existing links in your sheet will be automatically converted to the new markup. And of course, you can apply this tip to all other tags in a markup, not just links.

Please note: Markup editing is currently only available On My Mac and in iCloud.