The time before and after the release of a new application is most exciting in a developer’s professional life. First, there is the pressure to accomplish everything in time. And then, the excitement when waiting for feedback…

Ulysses 2.0 hit the stores less than a week ago. Since then, we got tons of e-mails: support requests (as always after any launch), but also lots of compliments and acknowledgements. That’s so good. There’s nothing wrong with following a vision from your desk’s chair, but it greatly helps to feel that your work actually makes a difference for those who use it.

Things start to calm down gradually. We just like to bask a little more in the wave of appreciation, before finally getting back to business; to designing interfaces or writing code, support e-mails or blogposts, respectively…

This is what things currently look like in the App Store and in the Mac App Store. Thanks, folks! 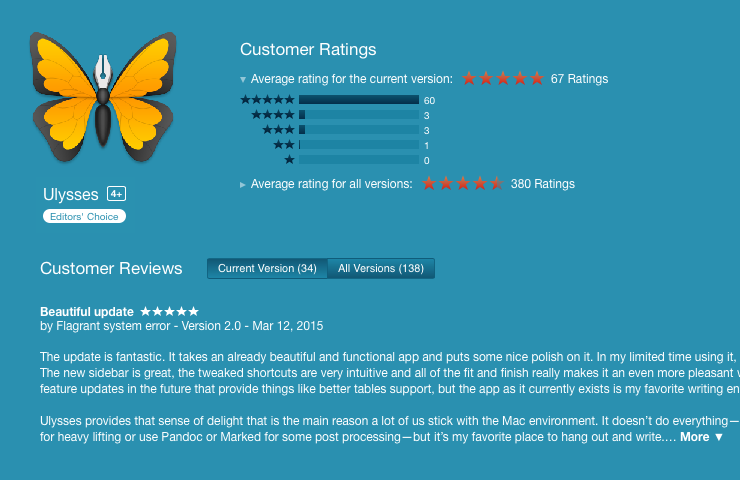 To date, I’m counting over 60 news items, articles and reviews in magazines, blogs and podcasts. Most are written in English, the lingua franca of the web, but there was also coverage in German, Italian, Spanish, French, Polish and Chinese.

I’m not exaggerating when I say I’ve been waiting for an app like this since Steve Jobs first sat in that comfy chair to show us the iPad.” – David Sparks

The overall opinion seems overwhelmingly positive. If you would like to examine what others say about Ulysses, check out MacRumors, AppAdvice, iMore, Lifehacker and Gizmodo, to name a few. Or study the articles by Ben Brooks, David Sparks and David Hewson in their respective blogs. The extensive review of technology journalist Mitch Wagner is also a good read; you’ll find it at SixColors, the new project of former MacWorld lead editor Jason Snell.

What’s more, here is a selection of articles that might be of interest for non-English-speaking readers (or rather, writers):