Murmel Clausen is a German writer of screenplays, scripts for TV shows and series as well as novels, most of them in the comedy genre. Among other things, he collaborated on the western parody “Manitou’s shoe” which was one of the most successful German movies since 1945. His first novel was made into a film by the German actor and director Matthias Schweighöfer.

Murmel, could you please tell us how you got around to doing what you do?

I have to blame and thank my old friend Max Witzigmann for that. He worked for a radio station in Munich after graduating from school and asked me in 1994 to do a comedy show with him. So I had to write my first skits and had a great time doing so. Some of the stuff is still pretty funny. Then Max introduced me to a TV producer who hired me for a comedy show as a writer. But I have to admit that it took me another, well, at least seven years to call myself that.

Have you always wanted to do this, or did it rather happen by chance? Or let me ask the other way round: Have your ever considered an “ordinary” profession such as clerk, baker or teacher?

After school I worked for Microsoft in 1995. I started on the telephone helpdesk but thought that HTML was pretty neat. The whole internet thing seemed quite exciting, so I started coding pages. Okay, coding gives you a wrong impression – HTML was basically text formatting back then. A few months later some friends and I wanted to set up an online shopping platform. But we could not convince a big company – whose name I won’t tell – to invest 10,000 € in that fairly new technology. So we gave up. In retrospect that was foolish. But it kept me writing.

Would you consider yourself a funny person? And if yes, do you think this is a prerequisite for your job?

Of course I’m funny. Maybe not one of those people that keep cracking everybody up at the table. But I’m quick-witted and make people laugh. If that’s hard for you, it’ll probably be a drag to write funny stuff. It definitively helps if it’s in your mind or blood or blatter (not quite sure where it is located).

What would your advice be to someone who wants to become a screenwriter?

Read screenplays. Watch movies. Write for shows that are already successful. Meet people. Never give up. Accept criticism – nobody wants to make your screenplay worse. Learn to understand what people are saying, to translate their input. A screenplay is not finished until the movie is shot. If you can live with that, you might be able to make it.

You collaborated on some famous German comedy movies, such as the western parody “Manitou’s Shoe”, as well as some popular TV shows and sitcoms. As a screenwriter you’re less in the spotlight than an actor or director. Does this bother you? 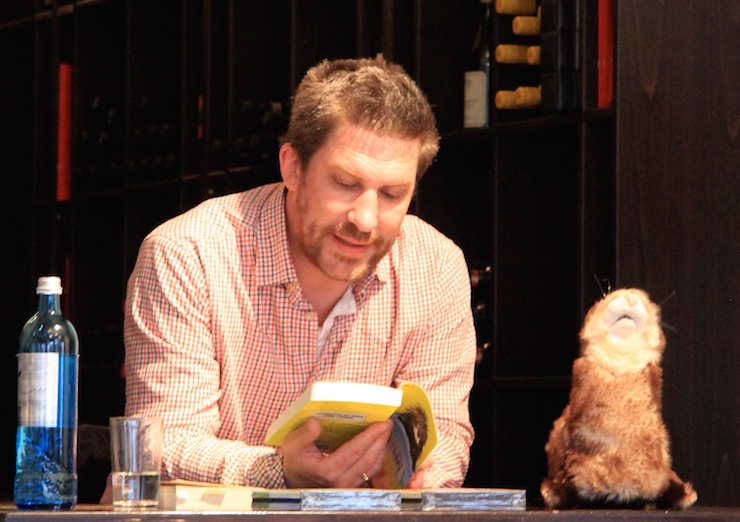 Sometimes it does. But I’m usually happy with my life. Just two days ago I got a letter from a woman who read one of my novels and loved it. Made my day. I can go out and nobody recognizes me. I’ve met a lot of actors who can’t do that. And directors, well, they take your script and have to work with it. Some tend to get the illusion that they wrote it in the end – but most of them are grate- and respectful folks. Yet I regret that I never went to film school to study directing.

Recently you have been writing movie screenplays for Germany’s most popular crime series “Tatort”, together with Andreas Pflüger. Is it different to writing a comedy?

Our movies are funny. Andreas also has a funny bone, so we make a great match. Yet they are told through the eyes of the investigators who have to solve a homicide case. And, of course, there are some rules that come with the series, but our editor and the producers have a lot of faith in us and are not keeping us on a tight leash. Still it’s a little delicate at times to spice it up with humor. We’ve done well so far, our next movie “Siegrid & Roy” is being shot in the city of Weimar these days – and it’s funny, thrilling and surprising.

And I have to mention Andreas Pflügers novel “Endgültig” that’ll be released next spring. It’s incredibly well written, a page-turner that you won’t put aside. He’s a master of suspense and a god gifted storyteller.

Where does your inspiration come from, how do you find your jokes and stories?

I usually order inspiration online. Jokes and stories are complementary.

Do you have something like a daily routine, and what does it involve?

Writing for a living is a job as any other. I don’t believe in the romantic image of the writer sitting anywhere he wants, typing away. I have to leave home and sit in my office from 9 a.m. to 6 p.m. to get my work done. Currently I am developing the routine of printing every scene after writing it, proof-reading it on paper – and correcting whatever seems wrong. It’s not eco-friendly, ruins my carbon footprint, but helps me get the job done properly.

For the audience, comedy movies and sitcoms are fun and entertainment, but for you it is your profession. Does one have to work very hard to be a good comedy writer?

It doesn't matter whether you write comedy or drama – it’s hard work. For me it is easier to come up with funny ideas, dialogues or characters. For others it’s the tragedies. But it’s still hard to stay focused on one story, until every word seems right. My experience in a nutshell: If it comes out easy, it’s probably shit.

Do you ever laugh at your own jokes while you’re writing?

Usually I do. At least I smile when I come up with them. For me it’s not all about the high laughs, but the joy while reading or watching things I’ve written. And there are some jokes that crack me up every time I read them.

With a novel, you’re putting yourself out there. If it’s bad, you take the fall for it. But if it’s great, you’re getting the roses.

You’re currently working on your third novel. What is the difference between writing a screenplay and a novel?

I was going to say ,“less text formatting”. But that’s just one percent of it. It begins with your name on the cover of the book. That’s you presenting your work. You’re putting yourself out there. There’s no director, no actors, no producers. If it’s bad, you take the fall for it. But if it’s great, you’re getting the roses. And since it’s not the effort of a group of people like a movie, you have less people commenting it in the editing process. It’s your editor and whoever you choose to give you feedback. For me, it’s a few friends and my wife Caren. Their opinions are indispensable.

We’re pleased that you use Ulysses for writing. What made you choose Ulysses?

It’s simple, fast and secure. I don't want to spend a second thinking about text formatting while typing. Just hit the fullscreen shortcut and start. Then minimize, check Facebook, Twitter, news. Make some coffee, stare at the wall – and woohoo, back to fullscreen. And I want to be able to quickly move my chapters (even though I usually don’t have to). The output works like a charm, the new DOCX option is great. I wrote my first novel using Scrivener, but it got too complex and has a terrible export function that I never really grasped.

What could we still improve?

Title pages. Or at least markup definitions (like title, subtitle, writers name) to create one. And a better spellchecker than the system-wide one. It’s just too limited in its vocabulary and adding words is a pain. But those aren’t complaints – I’m very happy with the app as it is.

Not sure if it is appropriate to ask this question, but I’m curious: Is Murmel your real name? I love it, but it seems quite unusual to me.

Ulysses is simple, fast and secure. Hit the fullscreen shortcut and start.

No, it’s not. It’s the consequence of my first protest. My parents named me Claus Clausen. Maybe they thought I was stupid. And since Clausen was set, I had to learn writing that someday anyways. They were confident that I’d be able to omit the last two letters. But then I started screaming like a marmot. That’s a Murmeltier in German. They always have one marmot guarding the colony. As soon as that guardian marmot sees an eagle or some other danger, it whistles. I sounded just like one when my godfather came over and asked my parents, if they had caught a marmot. And that just stuck.

Did you know that you are listed in an online database for first names in the field “Famous Person called Murmel”?

Nope, I should probably put more effort into googling myself. I once facebooked myself though, and found a girl called Murmel Clausen. I sent her a note claiming copyrights for my name which she must have taken seriously. At least I can’t find her anymore. So, in case you read this, Murmel Clausen, I am sorry. It was meant to be a joke! I should have used an emoticon or two …