Niko Formanek quit his job as a PR executive to become a stand-up comedian. Joking about his family life is now what he does for a living. In our interview he talks about how he got there, the up- and downsides of the funniest job in the world, and why for him Ulysses offers a close-to-perfect writing environment.

Comedian is a rather exceptional profession. How did you become one?

Pretty late. I began my career on stage at the tender age of 44. Before that I had been working in many other fields. After studying communications in the US, I worked in politics, managing parliamentary and presidential election campaigns in Austria. Then I got into public relations and was Vice President of Communications for Bertelsmann, a German media giant. When my wife and I had children, I started my first own company trying to be part of the online gold rush. Well, I did not make millions. But the project turned into a rather large photo agency which I sold to the Austrian Press Agency. Then I felt the urge to do something completely different: become a stand-up comedian.

I began my career on stage at the tender age of 44.

Since my college days I have been an avid fan of stand-up comedy. So I started couple of satirical side projects. One of them was an Austrian satirical website, similar to the US magazine The Onion. It ended up with more than 12 indictments, two police searches in my home as well as fines and court costs adding up to more than 180,000 Euros. Yes, Austria has a limited concept of free speech.

Anyway, at some point I just had this crazy idea of doing comedy on stage. So I took a seminar in Germany and invited myself to a comedy club in Hamburg. After returning to Vienna I set up a new company called gagster comedy AG and started a regular comedy show. Today I am still hosting our comedy club style show all over Austria and also in Germany. We represent major artists in Austria, and I have managed to get a “comedy career” going for myself. Last year I reduced my involvement in the company to focus more on my career as performing comedian.

On stage I perform regularly and mainly in Germany, either as guest or host in big comedy shows and on cruises, or I do my solo show.

Are there specific topics you especially like to joke about?

Yes. I will turn 50 this year, I have been together with my wife for 30 years, and we have a daughter (17) and a son (13). This is my topic, or rather theme: all these minor or major catastrophes and the craziness of family life. This is where my jokes and stories come from. My feeble attempts to be cool in the eyes of the new boyfriend of my daughter, the inspiring efforts my wife and I went through to have some kind of sex life after having kids. Or when my son’s teacher explained that my son was smart but lazy, and I jokingly replied: “No, he is just dumb and stupid. Just like me. I am happy if he remembers his name in the morning.” This was prompted by a text message of the teacher to my wife saying our family should go to therapy. My wife was not happy. I am actually a very lucky guy, because my wife and my family have not abandoned me yet, although I repeatedly broadcast private and embarrassing matters on stage.

I am actually lucky that my wife has not left me yet.

People who come to my shows often are or have been in similar situations, confounded by the challenges of family life. They’re pleased that there is someone on the stage complaining and joking about those things, so they don’t have to do it themselves. I am acting the lovable fool for all of them.

Could you give us some insight into the daily routine of a comedian?

Of course we don’t work all alike, although there may be some similarities. First off, it is not a hard life. Yes, we nurture the image of a struggling, hard-working creative genius, but this doesn’t reflect my daily routine. And I suspect there are more like me out there in the comedy world. 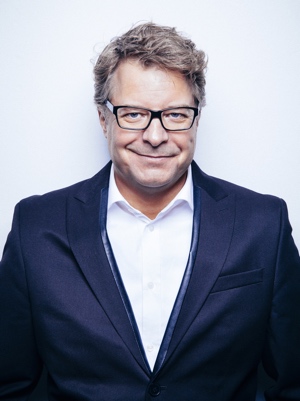 Basically we split our lives in two. There is the time on tour, which is exactly as one would expect according to the cliché. Travelling by train, plane and ship. Hotels which merit this name, and hotels which must have had some other purpose in life or already committed suicide. We do our shows, go to bed late at night and get up when the housekeeping staff runs the vacuum against the door to dislodge the Please Do Not Disturb sign. If we are not on stage, we try to catch up on sleep in trains, cars or planes, try to eat one healthy meal per week and, if possible, think and write up some new material.

When I am not traveling I am at home being a good husband. I try not to get up too late, giving at least the impression of being productive while my wife is working hard and successfully on her career. So I do the dishes, the laundry and the other household chores I am authorized to do according to my wife.

The comedy lifestyle has its downsides, but I have never had a better job.

Obviously, the most important thing for a comedian is to think up a couple of funny things and write them down. This works just like any other job in the world. You have to do it every day, relentlessly – and if you are lucky, one in ten ideas will have some kind of comedic potential. I try to get a “regular-job” feeling by doing my writing in the national library, away from home. I go there like to an office, turn off all connections to the outside world, and try to force myself to write. At least two hours a day, sometimes up to four. Honestly, most things I write are not exactly stage material. But if you don’t do those, you’ll never get to the good stuff.

I have worked in “real jobs” for many years, and I don’t want them back. The comedy-lifestyle has its downsides just as anything, but I have never had a better and more fun job in my life.

Are you funny in private life, too? Do friends and family expect you to joke around?

It depends. My wife and kids do not expect me to be funny – they fear it. Friends and other people do, but that is what people expect comedians to be. I am often baffled to meet colleagues who are hilarious on stage, full of life and energy, but seemingly turn into a completely different person as soon as they get off stage.

My family does not
expect me to be funny – they fear it.

For me there is no difference. I am the same Niko on and off stage. Yes, I take the risk to embarass or even annoy my family and friends with a stupid joke. But every good joke is worth it, and they know me. Though I am afraid not everyone finds me funny when I try to be. I can only hope they do – and count on goodwill if they don’t.

Which role does writing play in a comedian’s life? Do you write a lot and do you like to write?

It is impossible to overstate the importance of writing if one wants to do this job. Ideally, you would write like a maniac. The first thing after waking up should be writing. Before coffee, before breakfast, before going to the loo. Before your daily life starts, you should already have written for at least 15 minutes. And it is not important what you write. Just do it.

I wish I had always written as much as I should have. But it took me more than three years to really get rolling. I do write every day, minimum 30 minutes, but usually more than two hours. I had to train myself to be able to do this. And I needed to find the right tools.

I wish I had written more. It took me more than three years to really get rolling.

I have never written by hand, since I cannot read my own handwriting. I possess an impressive collection of notebooks, keyboards and tablets. Honestly, I expected each new toy to propel me into a new writing paradise. Well, it took a while, but now I have found my perfect setup: an iPad Air with a Logitech Ultraslim Keyboard. I use it everywhere, and this portability has greatly increased my output und ultimately made me more productive.

Yes, I like to write. But I had to learn to really love it. 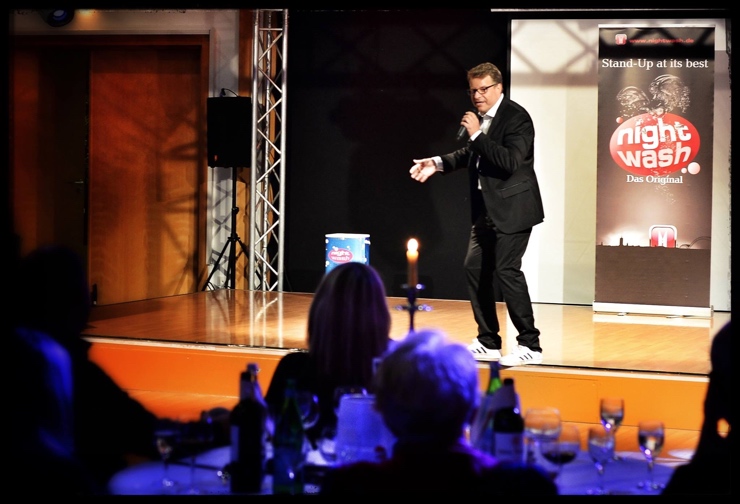 Could you describe what you use Ulysses for?

I use Ulysses for almost every word I type. I do my notes in there, my books, my ideas, my ranting, my freeform writing in the morning. Everything. I have been using many apps over the past years. On Mac and on iPad. And there is great software out there. But after discovering Ulysses via the web I have gotten very close to a perfect writing setup.

Why did you choose Ulysses? What are the benefits of Ulysses for your kind of writing?

Before I had different apps for different projects: Day One on iPad for random thoughts and ideas, iA Writer to write up material and jokes, Scrivener on the Mac for complete shows and books. Yes, it worked and the world was okay, but not perfect.

With Ulysses, all I have
to do is to take a sheet
and create.

I have always been looking for the one and only solution for all my writing, no matter on what platform or hardware I am on. With Ulysses, I found it. Its biggest benefit? I don’t have to think about my setup. I write if, when and where I want. And lo and behold, I am able to find and retrieve the things I wrote, no matter where I am or what machine I use. I do not have to think about saving a file, where I have saved it to, how to get it from iPad to Mac or to convert it into a PDF or an e-book. No problem, Ulysses does it. All I have to do is to take a sheet and create.