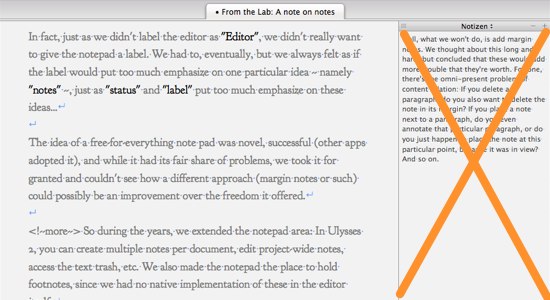 In Ulysses 3, we will completely revamp the concept of document notes. Instead of an always-present note/scratchpad to the right of every document, notes will become an optional, distinctive and on-the-fly affair.

I’d like to take a minute or two to elaborate on that and look at where we are today.

The original Ulysses 1 notepad was a one-stop place for almost anything you couldn’t (or wouldn’t want to) fit into your main text. We designed it to be as open and flexible as possible, with no disctint focus on any particular use, other than “any use”.

The free-for-everything note pad was novel, successful (other apps adopted it), and while it had its fair share of problems*, we took it for granted and couldn’t see how a different approach (margin notes or such) could possibly be an improvement over the freedom it offered.

So during the years, we extended the notepad area: In Ulysses 2, you can now create multiple notes per document, edit project-wide notes, access the text trash, etc. We also made the notepad the place to hold footnotes, since we had no native implementation of these in the editor itself.

What we now understand, however, is this: As nice as a free-for-everything approach is, most users would be better off with distinctive places for distinctive needs or contents. For example, if you want to have a reference picture available, you want just that: A reference picture. You don’t want to be made to add a picture into a “note” pad, and you don’t care if you could also add a movie or some other stuff.

If you want to add comments or general ideas/direction to a document… again, you want just that: Annotate the document.

Plus, since Ulysses 3 will have built-in support for footnotes within the editor, as well as support for links, in-line pictures and other media, there’s no more need to put any of these things into something like an always-on note pad.

This, dear friends, is another story.

* E.g., the exporters never knew what was inside a note, or how it was connected to a document’s content. Also, with the notes being full RTF, they never offered the same semantic functionality as the editor.